As I write this final instalment of Discovery Friday, we are hove to, waiting for weather to pass to finish our work on the RAPID moorings. The waiting is frustrating but should only be an extra few days—nothing in comparison to the original RRS Discovery, which spent an extra year trapped in ice in Antarctica waiting to be free. 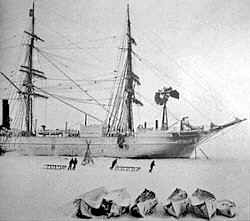 Captain Scott built his ship from donations to the Antarctic expedition. It was the last wooden ship built in Britain, built by the Dundee Shipbuilder’s Company and launched in 1901. Discovery was built for life in the ice of Antarctica. She had a flat bottomed hull and bow designed to ride up over the ice to break it with pressure. She had a steam engine but relied heavily on sail power to provide sufficient propulsion. The propeller and rudder could be hauled out of the water to avoid damage. Built for the ice, she handled badly in open water and was prone to large rolls.


Scott and his crew set sail in August 1901 and sighted Antarctica in January 1902. They spent a month mapping the coastline before anchoring in McMurdo Sound. They would stay there, trapped in the ice for two years. The idea of being confined in a 50 metre long vessel for two years, trapped in ice, with 47 men would not be something I can imagine enjoying.


The ship took part in various roles for the next 20 years before returning to research and exploration in 1923. It was at this point she was christened a Royal Research Ship, really beginning the lineage that our current ship continues today.


Much like Discovery II would do, this original RRS Discovery spent much of her time in the Antarctic mapping whale populations. This formed part of the Discovery Investigations from which started the Discovery Collections, samples from which are still being used for scientific research to this day.


There are a number of photos and paintings of this old ship on the new RRS Discovery, including two nice watercolours in the conference room. My favourite, however, is in the mess, taken from Discovery’s time as a research vessel rather than her more famous time as Scott’s Antarctic exploration vessel. It shows two men taking sampling with nets over the side. They are clad in gear that you might expect more to be wore by someone on safari in the early 20th Century. Perhaps these were the precursors of the hard hats and safety footwear we wear today. It is a nice picture to finish on as it completes the lineage of scientific research from the original Discovery through to our current home. 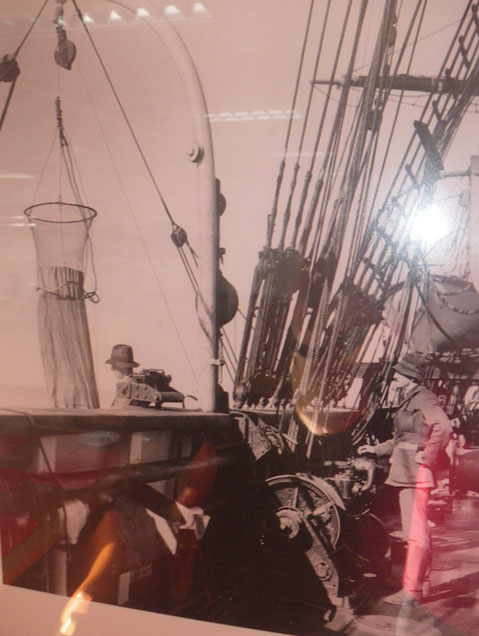 Written by Gerard (posted by Darren - slightly late due to a slow connection!)