Joint winners of the RAPID Challenge

Ten scientists ventured to predict the AMOC in the RAPID challenge competition. The preliminary analysis of the data has been completed, and it is time to announce the 'best prediction'.  But how do we quantify the best prediction? And do any of these predictions have useful forecast skill?

Competitors were asked to estimate what the mean AMOC would be in each of 6 quarters starting with April to june 2016 and finishing with July to September 2015. The ten entries and the AMOC calculated from a preliminary analysis of the new data is plotted below.


During this period the mean of preliminary analysis gives a mean AMOC of 15.05 Sv with a standard deviation of 1.04 Sv. This standard deviation is less than half that of the preceding three years, indicating that the AMOC has been relatively stable during the last 18 months.

How skilled were the predictions?

Four of the ten entries had an error less than 1Sv for the first quarter and each of these was also better than persistence. These results suggest a significant amount of skill when predicting three-months ahead, and the mean of all the predictions was almost spot on the value of the data with an error of just 0.05 Sv. In the second quarter things were very different. Only one prediction bettered persistence.

None of the competition entries had absolute errors of less than 1Sv for all of the first three quarters. Over the full 6 quarters the root mean square error (RMSE) of the entries ranged from 1.4Sv to 3.7Sv.

The lowest RMSE was the prediction of Leon Hermanson from the UK Met Office. The only prediction to have skill in both of the first two quarters was the entry by Daniela Matei and Helmuth Haak from the Max Planck Institute. These two entries are declared to be joint winners and will each receive a Discovery mug. Congratulations!

None of these hind casts showing skill beyond 6 months, and a prediction based on persistence (perhaps by chance) beat all of them. Thus the need for observations is clear, and the RAPID team will next be going to sea in Spring 2017 to retrieve the next measurements of the AMOC.

The results are only provisional. Full calibration and quality control of the data have not yet been completed. The calculation of the transport in the Western Boundary Wedge has not been completed and we have used the average value of preceding years for this component.

Written by David Smeed, posted by Val
Posted by Unknown at 15:47 No comments:

Prediction from the University of Southampton

This AMOC estimate relies on satellite measurements of sea level anomaly (SLA).  While it is not a true prediction or forecast, it does provide an alternate method to estimate ocean transports in near-real time, and in the interim before in situ data are recovered.  The method may further be applicable at other latitudes, enabling investigation of circulation changes across the Atlantic.


The SLA is first spatially smoothed (5 deg latitude, 10 degrees longitude) and the pixel nearest 70W and 28N is extracted. Time series of SLA and Rapid UMO transport are binned monthly, then a seasonal cycle is removed.  A linear least squares regression is calculated between monthly, deseasonalised time series of SLA and UMO transport.  To reconstruct full variability, a seasonal cycle from the Rapid UMO time series is added to the UMO estimate from SLA.


Using SLAs near 70W and 28N in the Atlantic, we can estimate the variability in the UMO transport (UMO*).   Combining this with near real time estimates of meridional Ekman transport at 26N from NCEP (scaled to match past Rapid estimates from ERA-Interim) and near real-time estimates of Florida Current transport from NOAA, we can calculate an estimated AMOC* = Ek + FC + UMO*.


The full method is based on the paper appearing in Frajka-Williams (2015). Here we have updated the estimates for a quarterly time series rather than just looking at variations on timescales longer than 1 year.

Prediction from the University of Exeter

A Statistical Time Series Approach to Predicting the AMOC

We take a different approach to the predictions from Sheffield and Oxford already presented on the blog. We do not use the wind data from 2014 to the present day to help with the prediction but make our forecasts purely from the past data. This means that our methods could be used to forecast into the future where no measurements of winds are available. Because we use statistical methods we are also able to give uncertainty estimates on our predictions.

We use two basic methods. In both cases since we are predicting quarterly means we average the original data into quarters. The first is to fit what is known as an ARIMA model. ARIMA stands for Autoregressive Integrated Moving Average. This plot shows our forecast with the associated uncertainty.

The second model we fit is known as a Dynamical Linear Model. This fits a model for the underlying state of the overturning plus seasonal component. Here is a plot of our estimate of these two components in the past: 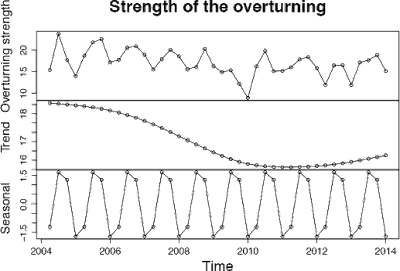 We can now make a prediction for the overturning into the future (in this plot): 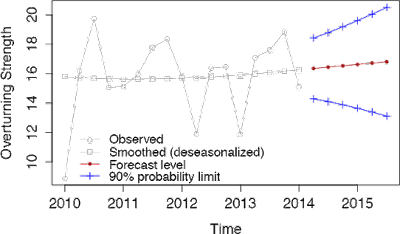 Full details of our method + the code to try your own forecasts is given here: www.rapid.ac.uk/challenge/Exeter_Rapid_prediction.pdf