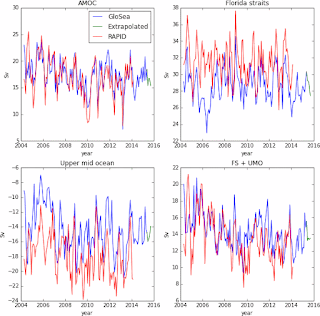 For the Ekman component, we do not have wind stress for the full period, however we found that the Ekman component had a good correlation with the NCEP zonal wind strength at the same latitude. Hence we used a simple linear regression model with the NCEP wind strength which we have for the missing months. For other components we used the seasonal climatology plus the mean anomaly from the previous 12 months (ie assuming persistence of the anomaly from seasonal climatology). These last 4 months are shown in each panel in green.
Posted by Unknown at 13:08